Exivity offers Service Providers the possibility to apply tiered prices and volume based rating to their services. Service Providers can benefit from the potentiality to set the price in a manner inversely proportional to the volume: the more you buy, the less you pay for that service. This way they can appeal to a wider base of customers and they can create their own sales strategy by offering them lower or higher entry-point prices.

Consider a scenario whereby customers pay per gigabyte of disk storage. For a non-tiered service, this is quite straightforward; we create the service (monthly or daily), configure a unit rate and the resulting charge will be the number of gigabytes consumed multiplied by the unit rate.

This is a somewhat restrictive model however and it may be preferable to automatically apply a series of discounts that kick in as the number of gigabytes consumed increases. In such cases, a tiered service provides just such capability.

There are a few key points about Tiering that are worth remembering:

Usage data is comprised solely of instance-level quantities. Every record in the usage from Amazon AWS, Microsoft Azure or even a less account-orientated source such as VMware or Veeam backup will almost certainly contain a reference to a unique instance ID of some kind whether it be a hostname, host ID, resource ID, disk ID or similar.

Consider a hypothetical cloud vendor who offers three sizes of VM; small, medium and large all of which are charged on a monthly basis. Each has differing amounts of disk, CPU and RAM capacity but all usage records for VMs reference one of those three sizes.

A customer of that vendor could provision a number of VMs for different purposes. Perhaps a couple of small VMs for sandbox/test servers, half a dozen medium VMs for development servers and four large VMs; two for email servers and two for database servers.

With 2 small VMs, 6 medium VMs and 4 large VMs in service, the customer would expect to pay for them on that basis - 2 x small, 6 x medium and 4 x large - on the premise that this is how many VMs they are operating.

From the cloud vendor's perspective, there are still only 3 services, however, these being the small, medium and large VMs. It is the monthly charge for each VM size multiplied by the instances of those VMs that determine the final bill that the customer has to pay.

Exivity fully understands the difference between instances and services. In our above example, there would be three services but the billing records may look more like this:

It can be seen that regardless of the number of services offered there can be any number of instances. Services are defined in a finite service catalogue but there is no hard limit on the number of instances that can be instantiated (well, short of trying to spin more of them up than the cloud can support but that's a little academic in practice).

Reports provided by Exivity are powered by a charge engine that processes usage data and emits charge records. Each charge record can represent either a service-level or an instance-level summary of cost.

In the above scenario, a greatly simplified view of the charge records produced by Exivity would be as follows:

Drill-down is important as it provides the ability to look inside the aggregated service-level charges in order to see the individual instances that contributed to those charges.

Instance-level records represent the most granular view of the data possible.

This concludes our brief diversion into the difference between Service-level and Instance-level charge records but bear in mind that tiering in Exivity is always applied at the Service level.

Exivity also provides drill-downs for tiered services and details of how the instance-level records accurately sum to the service-level records (not only in quantity but also in charge and on a per-bucket basis) are covered in subsequent sections of this documentation.

Developing further the scenario previously outlined in the Introduction section, let us consider the following desired business model for pricing storage per gigabyte:

Exivity uses the term Bucket to distinguish between each of the quantity ranges. Buckets are always numbered, starting from 1, and the first bucket will always have a quantity range of 0+

Exivity supports two different methods of applying this business rule each of which will result in a differing final charge. These methods are Standard and Inherited tiering.

Standard Tiered pricing works so that the price per unit changes once each quantity within a "tier" has been reached.

If 2000 gigabytes of storage was consumed then the resulting allocation to each bucket, and the final charge, would be as follows:

The rate tier interval is always monthly, meaning the tiered rates will be applied after calculating the monthly quantity totals for a service.

The Inherited Tiering mechanism is designed to optimize service costs by automatically moving data to the most cost-effective tier.

This model places the entire quantity consumed into a single bucket, which is the highest-numbered bucket that would have any quantity allocated to it if Standard Tiering was applied.

To illustrate this, we can continue with the case above: if the 3rd (and highest) bucket had some quantity allocated to it and Inherited Tiering was applied, then the result would be as follows:

In other words as each bucket is filled, its contents are carried over to (inherited by) the next bucket. The final charge after applying Inherited Tiering is simply the charge associated with the bucket into which all the quantity was allocated, thus 1,200.00 in the example above.

How to configure tiered pricing​

First, you need to set a service to be Tiered. 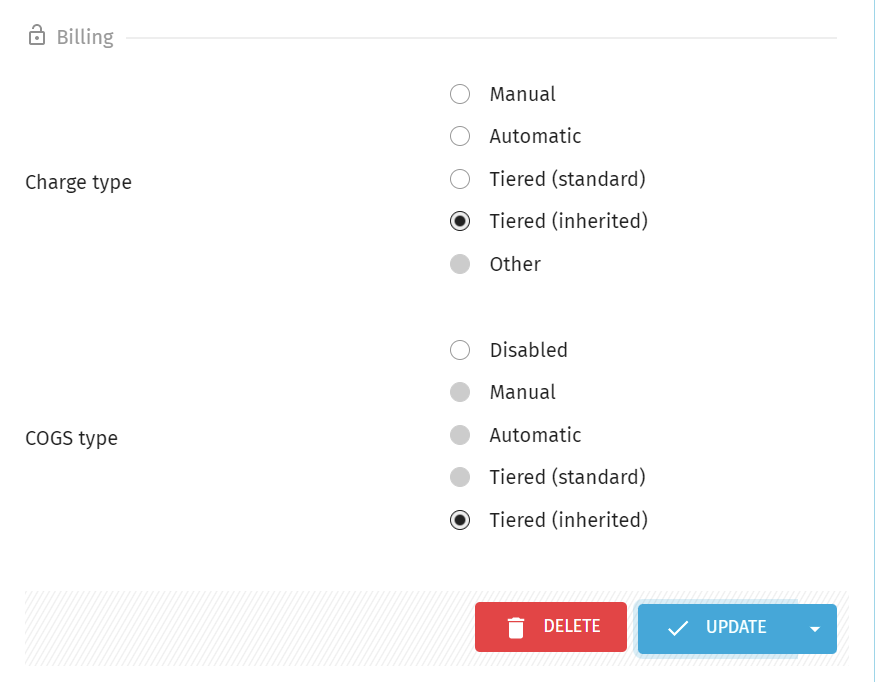 Next, you need to create your tiered model which will apply to the service you just updated. 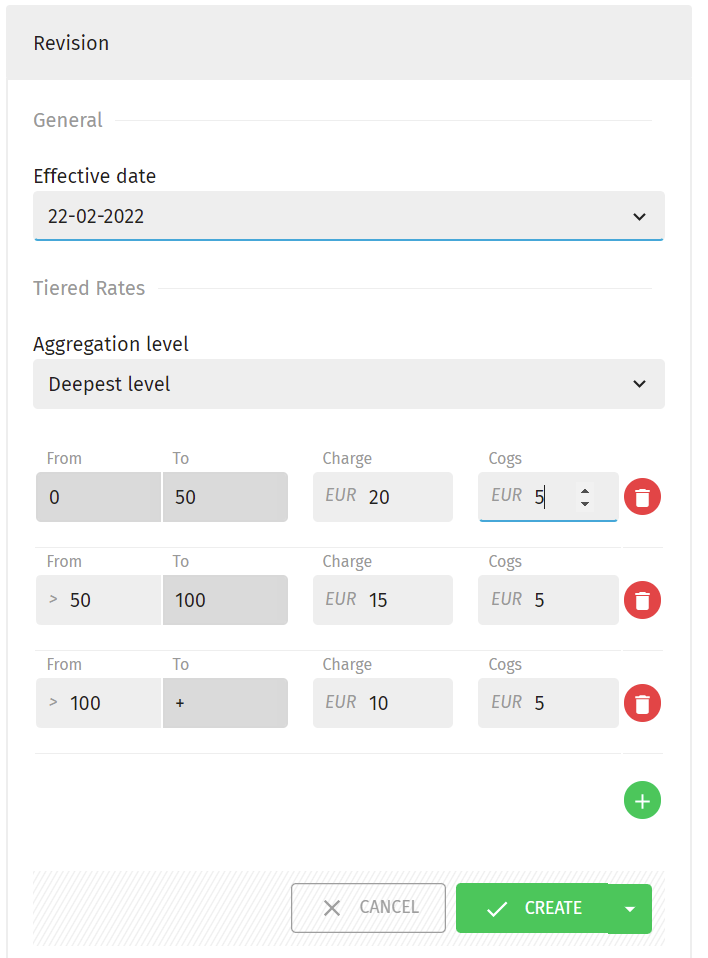